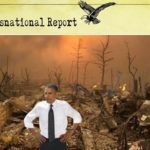 While the United States and the world prepares for the presidency of Donald J. Trump, “President” Obama continues to turn the world upsidedown in anticipation.

Our closest ally in the Middle East, and one of our closest in the world, Israel, has been truly betrayed by the administration.  By refusing to veto a U.N. resolution condemning Israeli “settlements” in Jerusalem (i.e., their own capital city), Obama and his little sidekick Secretary of State John Kerry have thrown a monkey wrench into the peace plans of Trump.  Truly, this display proves Obama’s anti-Israeli agenda and his alignment with the worst elements of the Islamic Middle East.

In a similar vein, Obama sanctions Russia by expelling 35 diplomats.  Billed as a punitive action following so-called “Russian hacking” in the 2016 election, it raises the question: if this was necessary, why now?  Also, are we really asked to believe that the United States and our allies don’t spy on Russia, as well as each other?  Of course we do!  Espionage is as old as recorded history.  However, the aggressive and public actions aimed at Russia will accomplish one thing: making it that much more difficult for Trump to reach a new understanding with President Putin.

Join us as we discuss these topics and more…