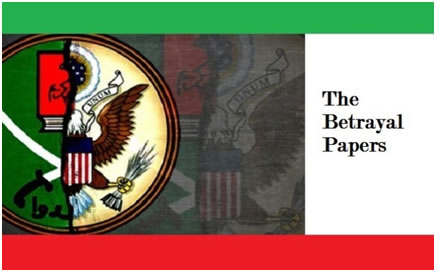 This revelation has become an indisputable fact for those who examine the evidence.

The Betrayal Papers is a six-part, research and multimedia campaign that presents this evidence.  It demonstrates the incredible influence that the Muslim Brotherhood exerts over the Obama administration, many members of Congress, and on American policy foreign and domestic.

This series has been meticulously researched by a team of journalists, national security bloggers, and retired military operatives. All of the information contained in this critical and informative campaign is compiled using Open Source Intelligence (OSINT) best practices.

Part I – Under Obama, the US Captured by the Muslim Brotherhood
[Print | Audio | Video]

Supplemental Article – And the Press Says Nothing…
[Print ]

A Kindle edition of The Betrayal Papers is available here.

A PowerPoint Presentation in PDF format is available here.

The Betrayal Papers is a product of the Coalition of Concerned Citizens.  Contributing authors are available for interviews to interested radio shows and television programs.