Can We Finally Now Turn the Page? 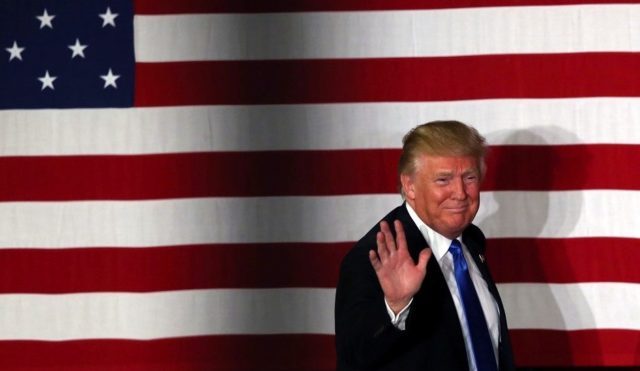 By Wallace Brushweiler and William Palumbo

Every dictatorship needs a devil.  And the dictatorship that is the modern Democrat Party – with several Republican allies – has their devil in Russia.

When it comes to President-Elect Donald J. Trump and his swift-acting transition team, day-to-day politics are being criminalized.  Every occurrence is another outrage, an unparalleled indignity for the country with no precedent in modern history.*

For example, Trump’s own businesses.  Everybody knew long before Trump ran for President that he was a billionaire with a sprawling, worldwide commercial empire.  But now that he has won the election and in the process of disentangling himself from the Trump Organization, his enemies are already speculating about impeachment over precisely the issue emoluments.  (Just out of curiosity: did these same people consciously overlook the Clinton Foundation during Hillary’s tenure as Secretary of State… yes!)

That’s but only one outrage among the left movement today.  The latest two manufactured, melodramatic and plain silly outrages both predictably cite a common devil shared by the Democrats and many in the Republican establishment: Russia.

Mr. Rex Tillerson is the CEO of ExxonMobil, one of, if not the, largest companies in the world.  The company he directs has energy-related projects across the world’s continents and around its oceans, including in Russia.  In 2012, Russian President Vladimir Putin awarded Tillerson the Russian Order of Friendship.

Now you might be thinking: Why is this Russian connection of Tillerson more disqualifying than the Bush family’s close association with Saudi monarchs, or ExxonMobil’s own interests in Qatar, two known sources of terrorist financing?  Excellent question.

Speaking of terror states, let’s get to the source.  John Kerry, who unfortunately is the current Secretary of State, is related by family links to his Iranian counterpart, Javad Zarif.  Iran is the number one sponsor of Islamic terrorism around the world.  Thanks to John Kerry, they also find themselves with more influence, money, and international acceptance than they have since the days of the western friendly Shah Mohammad Reza.

Do you remember hearing the media, the pundits, or Washington establishment complain John “Ketchup” Kerry’s close connections to the regime that chants “Death to America!” each Friday afternoon?  This relationship is more substantial than some government-given honor.  It’s all in the family … and some.

Up until now, nothing negative has been announced about Tillerson.  The same cannot be said about Kerry and his gang.

Ever looking to discredit and cast aspersion on the impending Trump presidency, the CIA has concluded that Russia hacked its way to a Donald Trump victory.  The so-called evidence?  Allegedly, Russia also hacked the Republican National Committee, but did not release the information to WikiLeaks, like they (allegedly) did with DNC information.  Ergo, Vladimir Putin’s government unfairly advantaged Donald Trump.

There’s just one small problem with this manipulative story: RNC Chairman Reince Priebus denies they were ever hacked in the first place.  The “hack” of the DNC was an inside job by some disillusioned Democrats .

One may be tempted to call this Russian fear mongering modern day McCarthyism – seeing “Reds under the Bed.”  Yet, do you recall Putin every calling for world revolution and the destruction of Western civilization, like his predecessors in the U.S.S.R.?  Do they chant this every Sunday morning after mass, like they do in Iran on Friday’s after mosque?

Senators John McCain and Lindsay Graham, predictably soft, joined their Democrat counterparts in the Senate – among them, the poisonous propagandist Chuck Schumer – and issued the following statement:

“Recent reports of Russian interference in our election should alarm every American … Democrats and Republicans must work together, and across the jurisdictional lines of the Congress, to examine these recent incidents thoroughly and devise comprehensive solutions to deter and defend against further cyber-attacks.”

Reminder: These are the same two Republican Senators who acted as special pleaders, in concert with Barack Hussein Obama, today’s sitting president, for the Muslim Brotherhood’s Mohamed Morsi.  Morsi’s first trip abroad as President of Egypt was to Iran, to visit Kerry’s buddies in the Iranian government.

Luckily for posterity, the FBI conducted a thorough examination of Russian interference into the election and declared there was no evidence to support the claim.

The election of 2016 proved that our federal institutions have become discouragingly politicized.  The Department of Justice bent into a pretzel folded like a double helix while attempting to rationalize their reluctance to prosecute of Hillary Clinton.

Obama, while bogged down in swamp of actual scandals in 2014, famously referred to them as “phony scandals.”

Would the CIA under John Brennan, former National Security Advisor to Obama, dare to misinform the American public with a truly phony scandal, and raise the specter of Russian intelligence active measures where there were none?  Is Attorney General Loretta Lynch blind in her pursuit of justice?

To believe the Democrats, some Republicans, and the entire media today, is to believe that Trump going, unannounced, to dinner with his family is not only scandalous, but downright perilous to our democracy.

Speaking of phony, you know what really is?  Obama, and his thoroughly fraudulent administration.  Kindly, we have not covered the Podesta travesty here.

Note to those who are undermining the incoming President – Barack Hussein Obama, Hillary, and the rest of the gang – you are just a bunch of crying baby losers.

* Unless comparable to another so-called devil, the disproportionally maligned Richard Nixon.