We the People … FOR DUMMIES 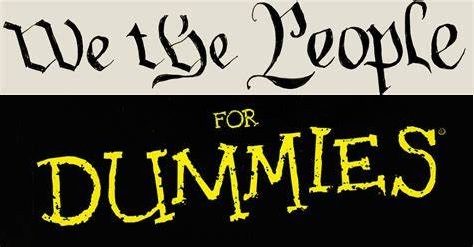 “We the People of the United States, in Order to form a more perfect Union…”

Do you remember the big Constitutional convention about ten years ago, where it was decided that “We the People” would be substituted by “the media?”  We don’t either.

Did you know that the nation’s primary concern is that some people aren’t paying the IRS enough money in taxes?  Until Tuesday evening, we did not know that either.

In a country with our first amendment, which protects freedom of speech and freedom of the press – among other rights – is it not fair to gauge the nation’s interest by the coverage received in the media?  By this standard, tax evasion by an international political consultant and a New York-based lawyer define today’s political debate.

Prior to Tuesday, strangely enough, high taxes were considered an issue of perennially great interest to the American people.  It’s funny how that issue became inverted when it involved Trump’s associates; evidently, petty tax evasion is more important than a sensible and reasonable tax code.  If tax evasion is the equivalent of treason, as the media, if successful, would have you believe, then somewhere in the range of 90%-95% of the U.S. population is likely guilty of subverting our democracy in the course of their taxpaying lives.

The Voice of Whom, Exactly?

A free press, our “news media,” is supposed to be – and is not successfully – the voice of the people.  If you don’t know this, just listen to the self-righteous journalists who insufferably claim to be standing up for “the truth” each day.  Although they’ll tell you that they’re “speaking truth to power,” in reality they are merely parroting the talking points of one political party, from whom they are virtually indistinguishable.  Today’s media put the “group” in “groupthink.”

Turn on the television, if you can stand it, and listen to the cable news (CNN, MSNBC, etc.) anchors and pundits.  Are these people representative of you and people you know?  Do they sound like people you know, in everyday life?  Do they talk like people you interact with on a daily basis?  Are they discussing topics that matter to you, in your own life?  Or, do you feel they are irrationally focused on utterly mundane, trivial, and contrived nonsense, especially lately?  (Can you say “midterms?”)

Is a prostitute who is attempting to blackmail the President of the United States, over an affair that occurred more than a decade ago, being aided by the media for any defensible reason?  Is her lawyer, whose insatiable predilection for fame and notoriety make even his exhibitionist (i.e., pole dancing) client seem bashful in comparison, contributing in any meaningful way to our nation’s political life?  Should the direction of the country be determined by a system that seems to run amuck off blackmail and innuendo?

Are We the People still allowed to ask such questions of our so-called “defenders” in the media?

The Left and the Media’s Vicious Circle

Here is a fact we should definitely consider (though one wonders how the media’s mendacious “fact checkers” would treat it): 99.999%, maybe more, of Americans have absolutely nothing to do with Paul Manafort or Michael Cohen.  Until Donald Trump won the election, their names were known to relatively few people, and practically nobody outside of their professional circles.  In a country of more than 300 million people, their personal finances and unscrupulous tax filings, for everybody but an ambitious IRS agent, were absolutely unremarkable.  If Trump had lost to Hillary Clinton, would they be facing a laundry list of criminal charges, unrelated to the investigation and prosecutor who charged them?

If not for Robert Mueller, would the Department of Justice have mobilized against Manafort and Cohen?  Should the charges against these two men be regarded as legitimate, as they have absolutely nothing to do with Russia, the relevant party in Mueller’s investigation?  Is this the true state of American justice today?  Is it just?

Whatever you do, don’t ask the media these questions.  They have made up their minds (or should we say “mind”) already.

Imagine picking 100 Americans of voting age at random – from cities, suburbs, and the country.  Now imagine asking them to list their top three political concerns, without any guidance or prompt on how they should answer.  Perhaps we would see a concentration of answers around: taxes, the economy, healthcare, terrorism, border control, North Korea, education, etc.  Do you believe that more than a handful (of jokers) would write “tax evasion,” “Paul Manafort,” or “Michael Cohen?”

There is a clear loop connecting the majority of the news media and the political left – and, for clarity, “the left” for these purposes includes the RINOs and all establishment creatures inhabiting swamp.  Between the unbounded investigations of Robert Mueller, which command the full resources of the DOJ, and a media which distorts truth, turns nonsense into “serious” news, and routinely omits crucial facts and context, we realize how the loop persists without interruption.

We the People Must Reassert our Control

It is no accident that when members of Congress talk about their jobs, they say that they do “the People’s work.”  Regardless of whether that is still true today, this is the purpose of Congress and practically their unofficial motto.

Furthermore, Americans refer to the White House as “the People’s house.”  Again, we see that government in this country – as enshrined in the Constitution – was designed to serve the interests of the We the People!

Today, the national discussion – thanks to the media – revolves strictly around two personalities: Donald Trump and Robert Mueller.  We virtually never hear from the Attorney General, the titular head of the Department of Justice, which has control over Mueller’s investigation.  We don’t hear from Speaker of the House Paul Ryan, the most powerful member of Congress, who is third in line to the presidency.  They might as well not exist.  This is very wrong, and should profoundly disturb all Americans.

Citizens of a free republic, as America was envisioned by its founders, cannot cede power to unaccountable agents in the media.  Donald J. Trump, our president, called the media “the enemy of the people.”  While we absolutely do not condone any violence toward this “enemy,” President Trump has very valid and timely point.  If we Americans wish to remain free – if we expect that government will work solely in our interest – then we need to be our own watchdogs, our own special interest group, and reject totally the agenda of the media and its sponsoring party.