The Price Of Liberty And The Cost Of Energy 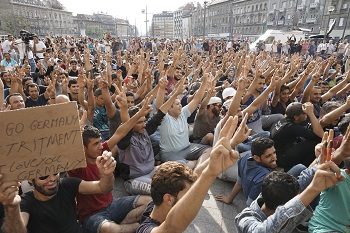 By Alex in Spain

Should we look in another direction, or should we speak up about the reality of what is happening around the world?

While a large number of people are brutally executed with or without reason – against the basic European principle of the right to live – we look in the other direction in order to ensure that we don’t suffer an increase in the cost of energy.  Such an increase would, you see, compromise our businesses and economic performance.  Life is valued cheaply when it does not affect our society directly.  We still do business and depend on countries that do not respect life and/or our western values.

Instead, conveniently, we look away to make sure we retain the economic advantage provided by cheap energy prices.  This is the reality.

It makes you wonder: do Muslim countries support the wars that have led to the humanitarian crisis in order to make sure the west faces major social challenges that come with the “refugees,” and a dependency on foreign oil?

Why don’t all Muslim countries receive their brothers and sisters from around the Middle East instead of pushing them into the Mediterranean?   Instead of welcoming them, the leaders of Muslim countries encourage their fellow Muslims to look toward the Christian world for refuge.

Defending our western values is not about being racist.  It’s about avoiding the abuse that results from the generosity of western societies (which have opened their doors to visitors without setting any rules based on western principles).  The west’s welfare and social systems are being abused.  Furthermore, we are at great risk due to serious demographic pressures.  If left unaddressed, a new Muslim majority could demand political changes that are in direct opposition to our own European political ideals (religious freedom, respect for women, freedom of speech, etc.).

Before looking to protect other people we should look to protect and support our own people!  It’s always easier to look at the yard of our neighbor than to your own yard.  While we continue to justify all the social and security challenges that come with unrestricted Muslim immigration to Europe, our home is in jeopardy.  I don’t mean that we should not help at all, but we must look more carefully at who we bring into our societies.

Let’s face it: we are guilty of not protecting our societies and our values.  We are guilty of not taking responsibility for what our politicians have been doing across the west (and worldwide).  Now it is time to act – to step forward and get back to the principles of the French Revolution and the American Declaration of Independence.

The money we pay terror sponsoring nations for oil fuels the war and destruction in their own countries.  And when their own people have to leave the Middle East due to the war and chaos, we import millions of people, any of whom could be potential terrorists who will kill our own people.

What are we doing?

Previous PostWill The Farsi Island Incident Turn Out To Be...
Next PostFor the Confused Media: A Dummy’s Guide to ...