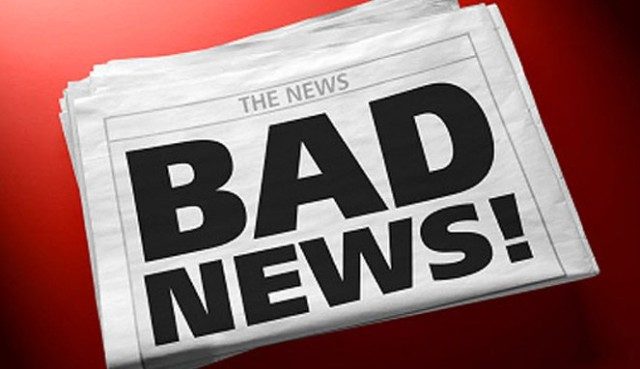 It hadn’t even been a week since Wednesday’s terrorist attack in San Bernardino, CA killed fourteen people at a Christmas party, yet by Saturday at lunch we already learned of another shooting crisis in Neenah, Wisconsin.  A hostage situation was fortunately resolved, but as a result one person was hospitalized.  Should we be at all surprised?

The tough lessons for all the media (written and television) are that endless reporting on events involving horrific violence, i.e. terrorists, only encourages copycats by psychotic individuals who are already “on the edge.”  To save innocent lives, the entire national media must cease their breathless and extended coverage of such events.

Do we really need 72+ straight hours of non-stop reporting and commentary on the San Bernardino terrorist attack?  How is the public served by perpetually airing bloody, grisly pictures of the deceased, retrieved weapons, guns and pipe bombs, etc.?  Answer: it isn’t.  In fact, the public is directly endangered by the media’s non-stop irresponsible reporting.

A tough lesson for an already unprepared, and to a certain extent, stupid media

It’s bad enough that the American and Western media are incapable of reporting the basic truth about the Obama administration; namely, that it is stacked with Islamic terrorist sympathizers, czars, etc. all the way up to the very top.  If the media had told the truth regarding Obama and his advisors, it would be well-understood that the Arab Spring was a deliberate plan to overthrow friendly governments and empower the terrorist Muslim Brotherhood in the entire North African region.

Prior to the advent of global Islamic terror, the peak of leftist-inclined terrorism in Europe was during the 1970s and 1980s.  Throughout these two decades, Communist terrorist organizations such as Baader-Meinhof (aka Red Army Faction, RAF), Brigate Rosse (Red Brigades), Prima Linea, Action Directe, ETA, and IRA took hostages, kneecapped and kidnapped political leaders, and, through similar actions as the modern Muslim equivalents, tore at the fabric of civilized society.

It didn’t take long for European governments intelligence agencies to recognize a pattern: the longer that the European media publicized and covered these attacks, the more likely it is that copycats will be inspired to commit more violent crimes.  The copycats didn’t even necessarily have anything to do with the intent of the original terrorist attack.  In fact, most copycats did not.

Indeed, the majority of copycats were just psychopaths who were already on the verge of committing violence (for one reason or another, i.e. mental instability).  The consistent drumbeat of the media merely pushed them over the edge.  From time to time, this was accompanied by the help of drugs.

Although it took nearly three years of discussion, European intelligence agencies eventually persuaded their media outlets to take action.  To prevent more violence, the governments conferenced with the heads of press agencies and urged them to show restraint in their reporting.

The media was in no way prevented from reporting the terrorist attacks.  But in the end, the news cycle was shortened to save innocent lives by inspiring copycats.

Let’s admit it: blood on the front page of the paper sells more copies (le sang à la une).  Likewise, 72 straight hours reporting the San Bernardino attack provided a boost in ratings for cable news networks, enabling them as a result to charge more to their advertisers.

Let there be no doubt about it: the flagrant irresponsibility of the American media these days extends to putting profit above lives.

For this, the media and their owners have blood on their hands.