What’s Next Aileen? Interview about EU Elections and Giulio Andreotti 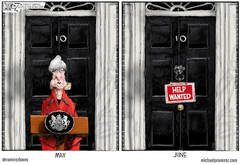 Giulio Andreotti OMI SMOM OCSG OESSH (Italian: [ˈdʒuːljo andreˈɔtti]; 14 January 1919 – 6 May 2013)[2] was an Italian politician and statesman who served as the 41st Prime Minister of Italy (1972–1973, 1976–79 and 1989–92)[3] and leader of the Christian Democracy party; he was the sixth longest-serving Prime Minister since the Italian Unification and the second longest-serving post-war Prime Minister, after Silvio Berlusconi. Andreotti is widely considered the most powerful and prominent politician of the so-called First Republic.
Beginning as a protégé of Alcide De Gasperi, Andreotti achieved cabinet rank at a young age and occupied all the major offices of state over the course of a forty-year political career, being seen as a reassuring figure by the civil service, business community, and Vatican. In foreign policy, he guided Italy’s European Union integration, and established closer relations with the Arab world. Admirers of Andreotti saw him as having mediated political and social contradictions, enabling the transformation of a substantially rural country into the fifth-biggest economy in the world. Critics said he had done nothing against a system of patronage that had led to pervasive corruption.

Andreotti staunchly supported the Vatican and a capitalist structure while opposing the Italian Communist Party.[4] Following the popular Italian sentiment of the time, Andreotti also supported the development of a strong European community paying host to neo-liberal economics.[4] Though Andreotti belonged to the right-wing correnti, he was not adverse to the implementation of the European Social Fund and Regional Fund in building the European economy.[4]

At the height of his prestige as a statesman, Andreotti was subjected to damaging criminal prosecutions. Charged with colluding with Cosa Nostra, courts couldn’t prove that he had maintained his links with them after 1980, and ruled the case out of time.[5] The most sensational allegation came from prosecutors in Perugia, who charged him with ordering the murder of a journalist. He was found guilty at a trial, which led to complaints that the justice system had “gone mad”. After being acquitted of all charges (actually, in part due to statute-barred limitations),[5] Andreotti remarked, “Apart from the Punic Wars, for which I was too young, I have been blamed for everything that’s happened in Italy.”

Wallace S. Bruschweiler, Sr. is a quadri-linguist and subject matter expert in counter-terrorism and national security issues. He has over 30 years’ experience operating in Europe, Middle East, and North Africa. He is a results-oriented security executive, analyst, strategist and problem-solver with extensive expertise and 30+ years of achievement in complex domestic and international security and intelligence situations in a range of venues. He possesses broad cultural knowledge and awareness, derived from worldwide first-hand experience. Mr. Bruschweiler is a fluent speaker, reader and writer of English, French, German and Italian, and a conversational speaker of Russian.

Previous PostLife During the Pandemic (and afterwards)
Next PostMay 19 in NYC: Wallace Bruschweiler at Met Cl...