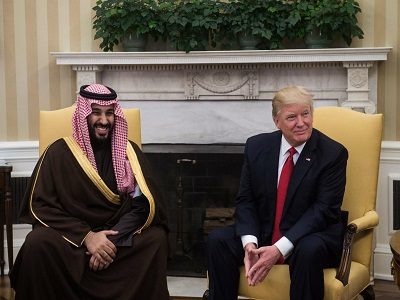 Anyone who supports President Donald Trump, and even his critics, are familiar with his promise to end the corruption that infests Washington D.C.  “Drain the Swamp!” was the rally cry, the aspiration of millions to see our federal government rid of self-serving politicians, lobbyists, corporate leeches, and various other special interest groups.

The American people want control over their government: they want to see it working for them, and not as merely a tool for the well-connected in D.C. to stuff their pockets and off-shore bank accounts.

How successful has this effort been?  This article will compare the corruption problem in the U.S., and juxtapose it against analogous developments in Saudi Arabia.

As a new prince, Mohammed bin Salman, was crowned by his father, Salman bin Abdulaziz Al Saud, of Saudi Arabia, he was determined to tackle endemic corruption for a variety of reasons.  For example: the Saudi people desired liberalizing social reforms, especially for Saudi women, and the ruling family was determined to end the culture of rampant financial corruption that had cost the Saudi government billions – in some cases, these financial dealings were also intertwined with geopolitical rivals Iran and Qatar.

The data below compares the problem of corruption in the United States and Saudi Arabia, and the respective approaches taken to correct it.

A Swamp by any other Name

A swamp, by any other name, still stinks.  In Saudi Arabia, the Prince calls the problem by its plain and well-understood adjective – “corruption.”  In Washington, the euphemism “swamp” is applied, but it cannot change the character of criminal activities and abuse of office.

In Saudi Arabia, the Prince has targeted corrupt officials and royal family members as well, regardless of title, position, and social status.  The results speak for themselves, and it appears that within the course of approximately three months the operation has nearly concluded.  Additionally, the government of Saudi Arabia will likely seize in excess of $100 billion of ill-gotten gains in the form of cash and assets.

The Saudis applied a systematic method to clean up their government and society.  What would an American equivalent of such an operation look like?  No doubt, it would be legal and transparent.  If there is to be a change in business-as-usual in our capital and government, it is up to President Trump and Attorney General Jeff Sessions – or his replacement – to develop such a plan.

*Note: Estimating the number of corrupt federal officials (elected or otherwise) in the United States is difficult and controversial, but below presents a model for a conservative estimate.