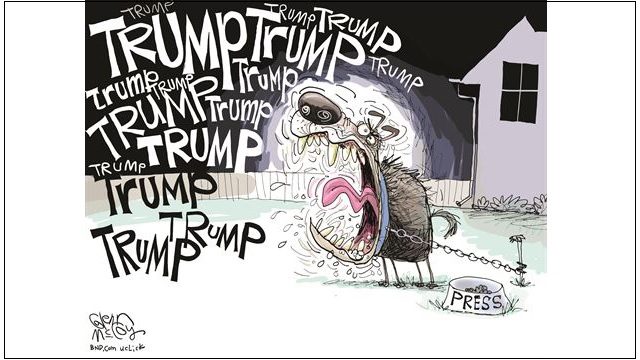 “The Caravan Passes and the Dogs Bark”

It’s been less than two weeks since Donald Trump defeated Hillary Clinton for the sought after presidency, but already the courtesan media, the paid-off Democrat party, and their militant activists are aggressively attacking President-Elect Donald J. Trump, Mike Pence his V.P.-Elect, and their Cabinet picks.  So much for the advertised “honeymoon” period.  The snakes and jackals already want warm blood.

Our modest advice to President-Elect Trump is simple and direct: Ignore them!

A Man of the People at Large

You, Donald J. Trump, were elected by the people of this nation (not by the media and pundits!) for one mission and one mission only: to restore the United States’ grandeur (“Make America Great Again”) after eight devastating years under the corrupt rule of a community organizer, aka Barack Hussein Obama, and his party of hardcore leftist minions.  The leftovers of the Democrat Party, which all but officially includes various media outlets, pundits, and the rest of the no-brainers are truly dogs (les  chiens); don’t let their barking interrupt your righteous, unstoppable American caravan (i.e., the Trump Train).

As a result of destructive policies and so-called “globalized” leadership, America’s institutions were left on terminal life support.  Despite a fifth column media, George Soros-organized protests, and a guaranteed attempt to sabotage your agenda, Mr. Trump, we implore you from the depths of our souls to fulfill the following:

While you work to Make America Great Again, Mr. Trump, let there be no doubt that the same powers, who so unfairly characterized and smeared you during the campaign, will not relent once you are sitting in the Oval Office and fully in charge.

It’s very unfortunate, but you and your family will be subject to:

The enemy(ies) will prove relentless, precisely because your presidency is a threat their power and their pockets, and their designs for an interlocking and so-called unescapable global government.  Be prepared for the worst, for certainly they will not give up without a fight to the bitter end.

Despite the alignment of the loudest voices to destroy your administration and mission, you have the backing of the people!  – millions of hardworking, tax paying, decent, educated, respectful, creative, and patriotic Americans.

In our capacities as private citizens, we will fight alongside you and the administration each step of the way, for the stakes are too high to observe silently from the sidelines.  Rest assured that all of your strong supporters are willing to step up to the plate and serve in whatever capacity needed.

Mr. Trump, soon to be President Trump: you are on a mission of the people, for the people, and by the people… it is to fix this incredible mess!  This mess was created by two parties, both now practically obsolete.  Your candidacy and the election cycle demonstrated conclusively that the two major parties do not exist in the forms known previously.  The near future will show where the chips will fall politically for the country’s two storied parties, and if they survive at all.

As the leader of the caravan, let the dogs bark and good luck!  (And you need it!)