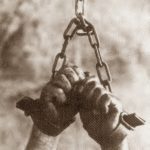 The line of the week goes to Donald J. Trump, who declared “the shackles are off!” He was talking about the shackles imposed on him by the politically correct GOP and the Hillary campaigning media.

Yes, despite WikiLeaks releasing thousands of emails proving that Hillary Clinton is indeed a crook, indeed a liar, indeed two-faced, and indeed guilty regarding Benghazi, somehow the media tells us that Trump is one who’s in trouble. And the sad thing is, the brainwashed, intellectually deficient among us believe it.

We’ll also discuss the latest with Wells Fargo and other big banks, who lately are teetering amongst media reports of fraud and averse market conditions. Finally, we remember the attack on the USS Cole, just nine months before 9-11-2001.

Previous PostWarning: The Shackles are Off!
Next PostUSA Transnational Report – October 8, 2016 ...