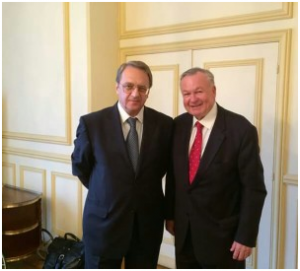 WASHINGTON – A retired U.S. general says he has obtained a Kremlin promise to meet with representatives of the Free Syrian Army to help resolve the Syrian conflict, according to a report in Joseph Farah’s G2 Bulletin.

Vallely said he told Bogdanov he could arrange for about 10 exiled Syrian army generals and Syrian diplomats comprising the leadership of the Free Syrian Army to meet with the Russians.

The goal would be to halt the Russian bombing of their positions in Syria while joining forces with the Russians to defeat ISIS.

Vallely, who served in the Vietnam War and was deputy commander of U.S. Pacific Command, has been in the forefront of getting U.S. arms to the FSA, including TOW anti-tank missiles.

In his capacity as chairman of the non-profit Stand Up America, Vallely was accompanied at the meeting by his Mideast expert, Naji N. Najjar.

Get the rest of this, and other, reports at Joseph Farah’s G2 Bulletin.

Follow his meeting with Bogdanov, Russian Foreign Minister Sergei Lavrov announced that Moscow would be willing to meet with FSA representatives.

Russian Foreign Ministry spokeswoman Maria Zakharova said that a meeting will take place soon at one of its embassies.

There has been speculation that a meeting of FSA representatives could take place in Paris, Vienna or in Abu Dhabi, United Arab Emirates.

Zakharova said at a press conference that the Kremlin is “in contact with the opposition on a daily basis.”

“We have always said that we are working with a wide range of the opposition,” Zakharova said. “The Russian foreign minister and his deputy have repeatedly stated that we do not rule out contacts with the Free Syrian Army. Moreover, we ask our partners to provide specific information on them; we are trying to work with them.”